Lots of things have been happening since my last post. School is now out for the Summer, but I’m taking a Summer class so (hopefully,) I won’t have to take anymore Gen Eds as a senior.

I took a trip the 2nd week in May back to Iowa to see my best friend, who had just gotten back from her study-abroad in Asia. I brought Stoli with me, and of course he had a good time. His favorite part of the trip was chasing a giant kickball around the yard. He attempts to look vicious, but he’s still a marshmallow.

Stoli celebrated his first birthday on May 31st. For his big day, we got him 2 new toys, played with him in the yard, and took him to the park with our friends’ miniature schnauzer puppy. He was a happy pup. Here’s a look back to him as a puppy. The photo is what the breeder sent us, so it’s not exactly high-quality, but you get the idea of how small he used to be!

At the end of May, I finally moved out of my apartment on the corner of Overpriced and Bad Landlord. I have now got a small one-bedroom apartment owned by the University. It’s about a mile from campus, but it’s not too bad (if you don’t mind being stampeded by kidlets every time you open your door).

The Kitchen and door to the back patio 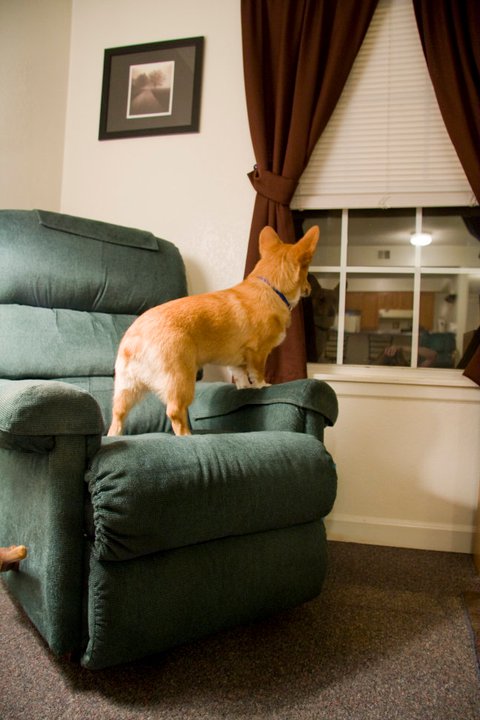 Stoli spends a ridiculous amount of time barking at his reflection in the window at night. For being the 10th smartest dog breed, Stoli has his moments of doubt. 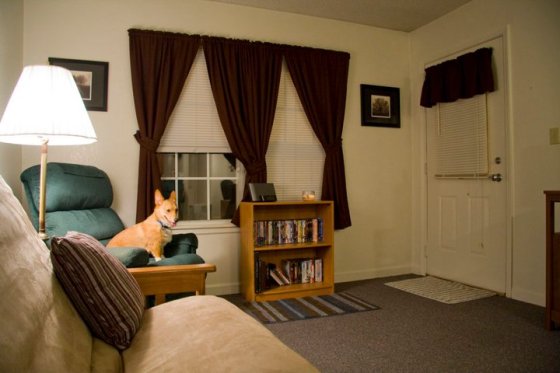 Door to the front patio 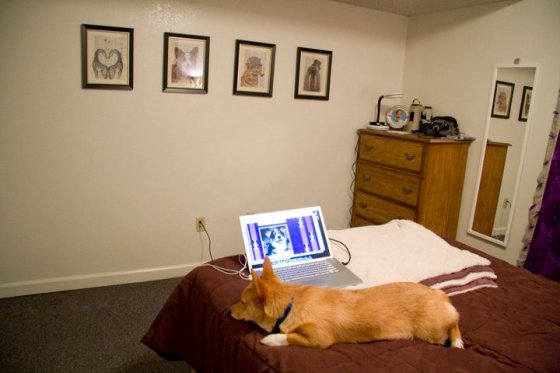 My small bedroom (and a look at my new prints!)

Panoramic of my small bedroom

I have neighbors above me and to the side of me. They have hoards of children and the walls are paper-thin. There's nothing like waking up to the sound of your neighbors screaming at their kids, threatening to beat them with a belt.

Last Friday, a group of Curry’s work friends and I went to Kansas City for a Royals game. We were headed into the City during rush-hour, and unfortunately, stupid Missouri drivers were out and about. There was a 5-car pile up, and we were the last car. We were really lucky, and things could have been much worse. We’re still waiting on Geico to give us estimates on Curry’s car. In the meantime, he’s been driving my car to work, and I think it’s totally killing him to drive American. 😉 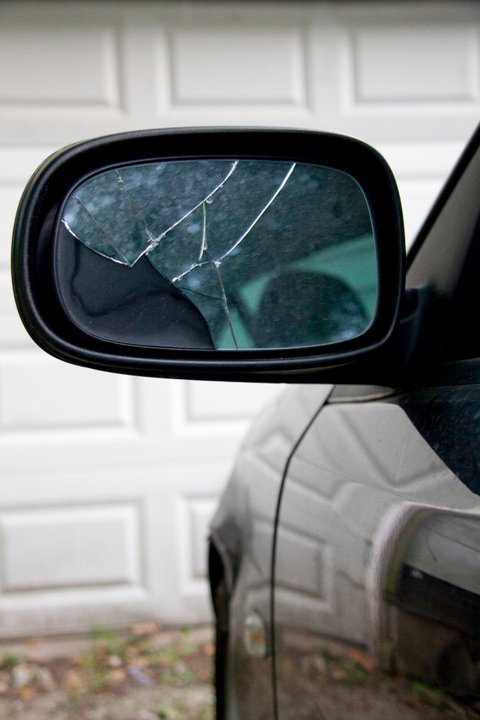 Broken Mirror. It's a good thing his mirrors fold back, otherwise it would have been toast. 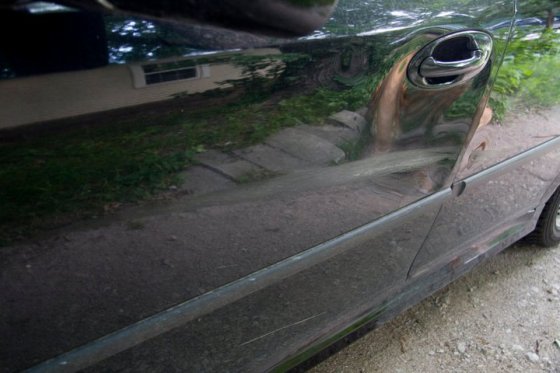 Scratch and dent on the driver's door. The door doesn't open properly, which makes it difficult to get in, unless you do it NASCAR style.

Well, I think that about covers life from the last month. I haven’t really done anything too earth shattering as I have been a slave to PictureME! Portrait Studios. We’re taking a trip to Wisconsin at the end of this week and then my family is heading to Atlanta for a vacation at the end of June. More photos to come.