We here in Missouri have been lucky so far this year. We have only had one snow, and most of it was gone by a day or two later. I had a VERY cold and snowy Christmas break in Iowa, and I was definitely looking forward to the warmer weather back down here. Afterall, I had friends bragging about it being in the upper 60’s while I was back home. Well that whole story changed when I got back to Missouri. On the first day of school (1-10-11,) all afternoon classes were cancelled because of a big snow storm moving into the KC Metro area. This morning all morning classes were cancelled, because people in Missouri really don’t know how to handle the snow. I think we ended up with around 6 inches according to the reports. I found it funny, because back when I was going to school in Iowa, 6 inches was a walk in the park. We still had school and carried on like it was no big deal. Not down here! As soon as a flake touches down people lose it. Granted the roads are slick (because they don’t properly remove snow,) and no one had shoveled yet, even though it’s been done snowing for 20 hours now

Anyway, this is the first real measurable snowfall we’ve gotten this year, so I was excited to see what Stoli would do. As you remember, from a previous post: (See:Stoli’s Winter Wonderland) Stoli had mixed reactions to the snow. At first he was terrified, but then he loved it. Well introducing Stoli to the snow this time was just as amusing. He went NUTS! he zoomed around the yard doing figure 8’s with his mouth open collecting snow. He would then find a place where the snow was deep and dig himself a hole to lay in, and then cover himself up with snow. He’d wait until I got close and then he’d pop out and run away. He was also a fan of trying to catch the snow my boots kicked up as I walked through the yard. We’ll probably have to buy a sweater or something for him because he likes to roll in the snow and is usually covered by the time he goes inside.

Here are a few shots of Stoli’s snow escapade this afternoon. 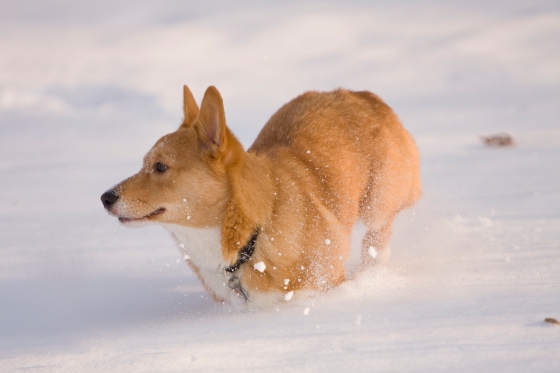